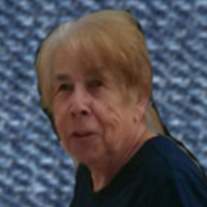 She was born on January 27, 1941 in Pratt, KS, the daughter of Raymond and Marie (Pinkston) Kile.
She graduated from Pratt High School.

On March 2, 1962 she married Frank Hanna in Liberal, KS. He survives.
They are members of Faith Tabernacle Church. She was a second mom to lots kids. She was known at church dinners for her cooking. She loved to take long rides, with her dog Spencer.

She was preceded in death by her parents, daughter Marla Gordon and a brother Ray Kile.

Funeral Services will be 10:00 am Monday, October 16 at Faith Tabernacle Church with Pastor Rex Petty presiding.

Visitation will be 5-8pm Sunday at Faith Tabernacle Church.

To order memorial trees or send flowers to the family in memory of Shirley R. Hanna, please visit our flower store.