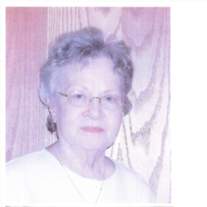 Shirley Dean Hendrix (Pedersen) passed away on Tuesday September 19, 2017 in Las Cruces, New Mexico at the age of 86.

She was born to L. M. (Pete) and Vivian Pedersen on September 28, 1930 in Amarillo, Texas. Shirley was a 1949 graduate of Liberal High School and retired from Wal Mart in 2002. She was a member of the First Baptist Church. Shirley loved ball room dancing, playing the piano and music.

She is survived by a son, David Hendrix and wife Anjanette of Las Cruces, New Mexico, and a daughter Leah Tooley and husband Chris of Fort Lupton, Colorado. Eight grandchildren, ten great grandchildren one niece and four nephews. She is preceded in death by her parents, twin sisters, a daughter, and a nephew.

A graveside service will be held at the Liberal Cemetery on Saturday September 23, 2017 at 11:00 AM.

To order memorial trees or send flowers to the family in memory of Shirley Dean Hendrix, please visit our flower store.