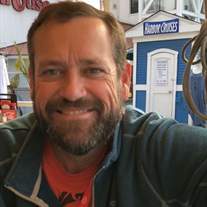 
He graduated from Marietta High School in 1988, after helping his football team win the state championship. He attended Oklahoma State University, where he graduated in 1994 with a degree in agronomy. Toby was employed at Seaboard Foods as an agronomist.

On September 2, 2017 he married Jennifer Lyddon in Oklahoma City. She survives.

He was a member of the Liberal Country Club, where he golfed every chance he got. He was an avid Oklahoma State Athletics and Dallas Cowboys fan, and a reluctant Denver Broncos fan. He was a loving and devoted dad, who enjoyed attending all his children’s activities.

His beloved dogs, Taco and Monkey

He was preceded in death by his parents.

Funeral services will be at 11:00am Thursday, May 3 at the Brenneman Funeral Home Chapel with Pastor Jeff Mitchell presiding. Public visitation will be from 10am to service time.
Services will conclude with a memorial party to follow at Billy’s Ayr Lanes, 2050 N Kansas Ave. in Liberal.

To order memorial trees or send flowers to the family in memory of Toby Hicks, please visit our flower store.