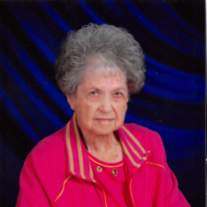 She was born, April 17, 1922, in Liberal, KS to Chester Deloss Parmelee and Mabel Bond Parmelee.

She graduated from Turpin High School in 1940. She attended Oklahoma University Medical Center in the fall of 1940 which was an all-women’s school of nursing.

Twyla graduated from Garden City Community College and received her Associate Degree in Nursing in 1978. She worked in the Epworth Hospital and Southwest Medical Center as an Emergency Room Nurse.

She was a member of the Turpin United Methodist Church, Women’s Aglow and Child Evangelism. She went on numerous mission trips with Volunteers in Missions, 10 times to Mexico, 3 times to Alaska and once to Russia. She enjoyed writing and wrote many, many poems.

Burial will be in Restlawn Cemetery, Liberal, KS.

Memorials may be made to the Turpin United Methodist Church Scholarship Fund in care of the Brenneman Funeral 1212 W.2nd St. Liberal, KS. 67901.

To order memorial trees or send flowers to the family in memory of Twyla Mae Young, please visit our flower store.