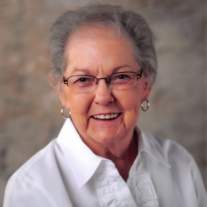 She was born on March 7, 1929 in Madison, KS to Leonard and Elizabeth (Heidrick) Shunk. She attended Madison High School, graduating in 1947.

As a homemaker and business owner of High Plains Pizza for over 50 years, she remained very involved in the local community.

She was a member of the Liberal Country Club, SCCC Booster Club, and Friends of the Baker Arts Center. She enjoyed supporting philanthropic causes in Liberal and across Kansas. As a great supporter of Seward County Community College, she was a sponsor of the Saintsations Dance Team, the Colvin Adult Learning Center and most recently providing an endowment gift for the Colvin Family Center for Allied Heath.

She was preceded in death by her parents, her brothers Bill, Preston “Jimmy” and Max; her sisters Corrine and Vivian; and a granddaughter Ashley Colvin.

Funeral service will be 11:00 am, Tuesday, December 20, 2016 at the First Baptist Church located at 2nd and Sherman in Liberal with Pastors Jason Ramsey, Kyle Woodrow and Gregg Turpin presiding.

In lieu of flowers, memorial contributions are suggested to the Seward County Community College Foundation designated for Nursing Scholarships, or to the National Multiple Sclerosis Society in care of Brenneman Funeral Home 1212 W. 2nd Liberal, KS 67901.

To order memorial trees or send flowers to the family in memory of Virginia Lee Colvin, please visit our flower store.