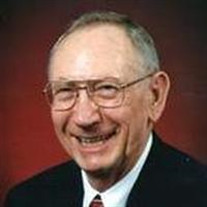 Benjamin Lee “Bennie” Witzke, age 81, died Friday, July 8, 2011 at Southwest Medical Center inLiberal, KS.He was born January 28, 1930 at Bessie, OK, the son of Leonard and Miriam (Kiehn) Witzke.He was a 1947 graduate of Turpin High School, Turpin, OK. He continued his education with a Bachelors degree from Southwestern State in Weatherford, OK, and then a Masters in Health Care Administration from Central Michigan. He served in the National Guard from 1948-49.He was a hospital Administrator in Kansas for much of his career serving at Hamilton County Hospital from 1961-68, Southwest Medical Center in Seward County from 1968 -78, Jefferson County Memorial Hospital in Winchester from 1978-82 and in Shawnee, OK at Mission Hill from 1982 -85. In 1985, he returned to Liberal to work at Southwest Medical Center as a Lab Technician.He was a longtime Liberal resident. He was a member of First Baptist Church where he was a Deacon and the Sunday school teacher for the MacArthur Class. He was also a past member of Gideons International Liberal Camp. He was a lifetime member of the American Medical Technologists.On June 29, 1949, he married Katherine A. Sawatzky at Clinton, OK. She survives.Other survivors include1 Son: Brock Witzke of Liberal, KS2 Daughters: Debbie Schremmer of Wichita, KS Karen Wiederstein and husband Robert of Valley Center, KS2 Brothers: Donald “Don” Witzke of Liberal, KS Leo Witzke of Purcell, OK2 Sisters: Norma Jarrett of Lawrence, KS LaVona Gaylord of Seiling, OK5 Grandchildren: Steven Witzke, Brian Witzke, Andrea Huddleston, Ashley Wiederstein and Travis Wiederstein1 Great-Grandchild: Conner Benjamin Huddleston8 Step Great-GrandchildrenHe was preceded in death by his parents and a Brother- Albert Dale Witzke.Funeral service will be 10:00 am Tuesday, July 12th at First Baptist Church, Liberal with Pastor Loren Robinson presiding. Burial will follow at Restlawn Cemetery.Visitation will be from 1 – 5 pm Sunday and from 9 am – 8 pm Monday with the family to receive friends from 6:30 – 7:30 pm Monday at Brenneman Funeral Home.Memorial contributions may be made to Gideons International or the American Cancer Society in care of Brenneman Funeral Home 1212 W. 2nd Liberal, KS 67901.

The family of Benjamin "Bennie" Lee Witzke created this Life Tributes page to make it easy to share your memories.