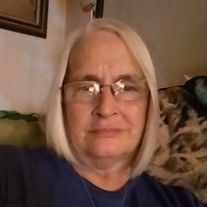 Billie Jean Proctor, 65, died, October 3, 2019 in her home of 21 years in Liberal, Kansas. She was born January 17, 1954 to William Robert Searcy and Shirley Anne (White) Searcy. Billie graduated from Beaver High School in 1972. On October 19, 1973 she married William Jan Proctor in Perryton, Texas. He preceded her in death in Liberal, Kansas on April 21, 2017. Billie worked hard all her life, she worked as a waitress, nurse aide, veterinary assistant, and at the time of her death was working as the Bus Supervisor for the City of Liberal. She was a member of the United Methodist Church, USBC (Bowling), Farm Bureau (Former board President for Seward County), Ducks Unlimited, and Pheasants Forever. Survivors are Son: Paul (Mary Ann) Proctor of Humboldt, Tennessee Daughter: Starla (Bryan) Young of Liberal, KS Brother: Robert Searcy of Dallas, Georgia 1 Sister: Jeri Pyles of Bridge City, Texas She was a proud grandmother to 5 grandkids: Joshua Mitchell, Christie Proctor, Dylan Ketcherside, Jesse Proctor, and Logan Proctor Billie was preceded in death by her parents, her husband, and her sister, Janet Beasley. Memorial service will be 11am on Wednesday October 9, 2019 at the First United Methodist Church, Liberal with Reverend Keith Anglemyer officiating. Memorial contributions may be sent to the First United Methodist Church or Angels for Animals in care of the Brenneman Funeral Home. To send condolences please visit www.brennemanfuneralhome.com

The family of Billie Jean Proctor created this Life Tributes page to make it easy to share your memories.

Send flowers to the Proctor family.