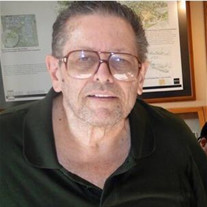 Daniel F. Thompson, 78, died Wednesday, October 4, 2017, at his home in Liberal. He was born December 23, 1938 at La Mesa, CA, to Howard Francis and Susie June (Zimmerman) Thompson. He grew up in Southern California, and graduated from Cajon Valley High School, in El Cajon, in 1957. He earned an AA degree from Freed-Hardeman College, in Henderson, TN, and attended David Lipscomb College, in Nashville. He graduated from McPherson College, McPherson, KS, in 1964, with a BS degree. He taught grade school in Hillsboro, KS, and on the Navaho Reservation in AZ. He was a substitute teacher in Kansas City, in the Coolidge, AZ area, and for USD # 480. He served as a minister with the Church of Christ in Kansas and Mexico. He lived in the Houston, TX area from 1987-1999. He moved back to Liberal in 1999, where he resided until his death. Survivors include: 1 sister, Lydia Dillon, of Ukiah, OR 2 nieces, Cynthia Ramirez and husband Gabriel, of Liberal, Debi Flores and husband Jesus, also of Liberal; several other nieces and nephews; many great nieces and nephews. He was preceded in death by his parents, 1 brother Frank Howard Thompson, Jr., 3 sisters, Cora Maxwell, Grace Willey, and Nancy Brooks. Visitation will be from 9:00 a.m. – 7:00 p.m., Friday, October 6, at Brenneman Funeral Home. Funeral Services will be held at 2:00 p.m. Saturday, October 7, at First Church of the Nazarene, with Pastor Arlen Ankle, officiating. Burial will be in Liberal Cemetery. Memorial Contributions may be made to Freed-Hardeman University Scholarship Fund, in care of Brenneman Funeral Home, 1212 W. 2nd St., Liberal, KS 67901. Condolences also may be sent to the family at www.brennemanfuneralhome.com

Daniel F. Thompson, 78, died Wednesday, October 4, 2017, at his home in Liberal. He was born December 23, 1938 at La Mesa, CA, to Howard Francis and Susie June (Zimmerman) Thompson. He grew up in Southern California, and graduated from Cajon... View Obituary & Service Information

The family of Daniel F. Thompson created this Life Tributes page to make it easy to share your memories.

Send flowers to the Thompson family.