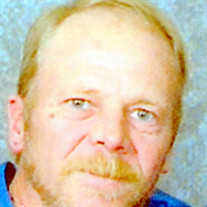 David Caldwell, 57 passed away unexpectedly Tuesday April 4, 2017 in Wichita at Via Christi St. Francis Hospital. He was born July 5, 1959 to Coeta Caldwell in Liberal, Kansas. David lived his entire life in the Turpin, Oklahoma community. He graduated from Turpin High School in 1977. He married Bobbi Wilson November 23, 2004. She survives. He worked for Bearing Headquarters and managed C & B Machine for many years. He was owner and operator of Bobbi D’s Café in Tyrone, Oklahoma and was a Pilot Car Operator for A & S Escort at the time of his death. He was a long-time member of the Turpin United Methodist Church. He served on the Turpin Community Water Board. He was an organ donor and many people will benefit from his generous nature. He enjoyed gardening and shared his canning rewards with the community. He loved cooking on his smoker and sharing with family and friends. He loved to hunt and fish and entertained many during every hunting season. He raised beautiful Brittany dogs and all of them were always treated like family. Survivors include his wife, many cousins, aunts, uncles, and many great friends. He was preceded in death by his mother and grandparents. Funeral services will be at 11 a.m. Monday, April 10, 2017 at the United Methodist Church in Turpin, Oklahoma with Pastor Todd Bergman officiating. Cremation will follow and a graveside service will be held at a later date at Independence Cemetery near Turpin. Friends may call from 1 to 5 p.m. Sunday April 9, 2017 with the family greeting guests from 3 to 5 p.m. at Brenneman Funeral Home. Memorial contributions may be made to the Turpin United Methodist Church in care of Brenneman Funeral Home, 1212 West 2nd Street, Liberal, Kansas 67901. Condolences may be sent to the family at www.brennemanfuneralhome.com

David Caldwell, 57 passed away unexpectedly Tuesday April 4, 2017 in Wichita at Via Christi St. Francis Hospital. He was born July 5, 1959 to Coeta Caldwell in Liberal, Kansas. David lived his entire life in the Turpin, Oklahoma community. He... View Obituary & Service Information

The family of David A. Caldwell created this Life Tributes page to make it easy to share your memories.

Send flowers to the Caldwell family.