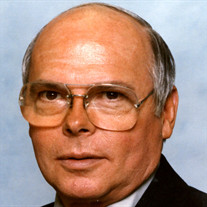 At the age of 87, David Irvin Parker passed from this earthly life to his heavenly reward on November 20th, 2017 at 7:15 pm at the Homestead Estates in Liberal, Kansas, after a long struggle with a form of Alzheimer’s, his wife Goldie (Kemper) at bedside. Born in Newton, Kansas May 2nd, 1930, David attended Anderson College, a Church of God affiliated school in Anderson, Indiana. He was a student in the first graduating class of Anderson University School of Theology. David served his Lord as a pastor in Cozad and Columbus, Nebraska; Beaver, Oklahoma; Lawrence, Kansas, Guymon, Oklahoma, Thayer, Missouri and back to Goldie’s home church in Liberal until his retirement in 1996, after 40 years of service. David was an avid member of the Rotary International for many years. He was known as a community pastor, visiting any sick who did not have a church home. David will be lovingly remembered by Goldie (Kemper) Parker, his wife of 38 years, his children Susan, Cindy (Steve Hays), Jolyn and Bradley, 7 grandchildren and 9 great grandchildren. He is survived by his sisters Miriam (Gerald) Holdeman and Carol Jo (Garry) Hornback. David is predeceased by his brother Phillip and parents, Irvin Ferdinand and Josephine (Ferguson) Parker. David was married to his first wife, Luetisha Fenner, from 1950-November 1977, who died of ovarian cancer. David married Goldie Kemper March 10, 1979. Residents who lived with David in recent years remarked on his kind, compassionate disposition in spite of his condition. Even after losing most of his short-term memory, David was able to offer a meaningful prayer for a congregation or person in need. Cremation has taken place and there will be no viewing or visitation. The family will greet friends at the conclusion of the service. A Celebration of David’s life will be held 2:00 pm, Monday, November 27, 2017 at Brenneman Funeral Home Chapel with Reverend Steve Cloud officiating. Interment will take place later in the family plot in Anderson, Indiana. Memorial donations in memory of David can be made to Children of Promise or the South Church of God Building Fund in care of the Brenneman Funeral Home 1212 W. 2nd, Liberal, KS 67901. Condolences may be sent to the family at www.brennemanfuneralhome.com or Messages of condolences may be sent to David’s daughter, Susan, at [email protected] Please include in the subject line, “In Remembrance of David Parker.”

At the age of 87, David Irvin Parker passed from this earthly life to his heavenly reward on November 20th, 2017 at 7:15 pm at the Homestead Estates in Liberal, Kansas, after a long struggle with a form of Alzheimer&#8217;s, his wife Goldie... View Obituary & Service Information

The family of David Irvin Parker created this Life Tributes page to make it easy to share your memories.

At the age of 87, David Irvin Parker passed from this earthly...

Send flowers to the Parker family.