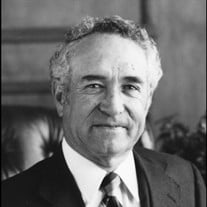 David L. Stanton, 88, of Plains KS, died November 18, 2016 at the Meade District Hospital. He was born October 24, 1928 in rural Plains, KS, to Vernon and Julia Bond Stanton. David graduated from Plains High School, Friends University and received his masters at Asbury Theological Seminary, Wilmore, KY. David was a farmer, crop duster, school teacher and as a vocalist enjoyed a singing career which took him throughout the U.S. and Caribbean. He taught vocal music in the school system of Lindenhurst (Long Island), NY where he met his wife Karen Razey also teaching in that school system. Karen died July 23, 2011. His varied career also included working as a piano tuner and technician on Long Island, and in Nevada and Kansas as well as teaching flight school in Nevada. He returned to Kansas in 1963 to help his father operate the farm northwest of Plains and continued in that endeavor until his retirement. A commercial pilot, aviation was one of his great loves and his various charity work included flying donated clothing to Oklahoma Indian reservations. When recently asked by his doctor how long he wanted to live he replied, “at least long enough to vote for Trump, twice.” Survivors Include: 2 Sons: Todd Stanton Plains, KS Victor Stanton (and wife) Leonardville, KS Brother: Marshall (Janice) Stanton Salina, KS Sister-In-Law: Joyce Blinn Stanton Birmingham, MI 2 Grandchildren He is preceded in death by his parents, wife, and a brother, Harold Stanton. Private family services were held Tuesday, November 22, 2016 at Plains Cemetery. A memorial service will be announced at a later date.

The family of David L. Stanton created this Life Tributes page to make it easy to share your memories.

Send flowers to the Stanton family.