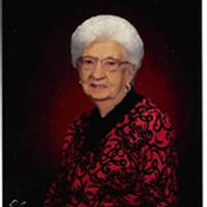 Edith Lorene Scruggs 95, died March 1, 2016 at Southwest Medical Center in Liberal.She was born Sept. 28, 1920 in Grady Co, OK the daughter of Robert L. and Nellie C. (Newberry) Richards. She has been a resident of Liberal since 1957 moving... View Obituary & Service Information

The family of Edith Scruggs created this Life Tributes page to make it easy to share your memories.

Send flowers to the Scruggs family.