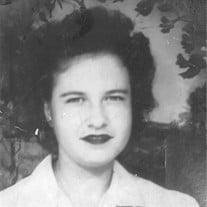 Erma Virginia Holcomb, age 91, died Monday, April 30, 2018, at the South West Medical Center in Liberal. She was born September 8, 1926 in Burlington, Iowa the daughter of George and Mary MaLena (Brown) Rice. She married Delbert Otto Holcomb in Burlington, Iowa. He preceded her in death in 2001. They were married for 55 years. She was a very considerate person and enjoyed being a homemaker, which made her a very good cook. She was very fond of Disney, coffee, playing cards, travelling, camping, Bingo, Alan Jackson, and Elvis Presley. Most importantly Erma never let her pain get her down and she was a loving wife, mother, grandmother to 14, great-grandmother to 23, and great-great grandmother to 6. Survivors include: Daughters: Marsha (Joe) Jensen of Harrison Ville, MO Pamela (Gary) Flores of Liberal, KS Daughter in Law Shelia Holcomb Sister in Law Alta Shoemaker Erma was also preceded in death by Her Parents; her son, Terry Lee Holcomb; and her daughter Deline Holcomb Visitation will be Thursday, May 3rd, from 1-7PM, family present to greet friends from 5-7PM at Brenneman Funeral Home. Funeral Service for Erma will be held at Brenneman Funeral Home on Friday May 4th at 2:00 PM with Pastor Rex Petty presiding. In Lieu of Flowers, memorial contributions may be sent to Alzheimer’s Association and VFW Post #909 in Dodge City, KS, in care of the Brenneman Funeral Home 1212 W. 2nd Liberal, KS 67901. Condolences may be sent to the family at www.brennemanfuneralhome.com

The family of Erma Virginia Holcomb created this Life Tributes page to make it easy to share your memories.

Send flowers to the Holcomb family.