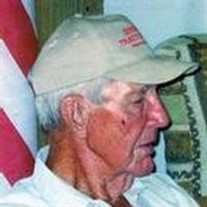 Ervin Wesley Waybright, 83, of Forgan, OK, died Tuesday, February 26, 2013, at Morton County Hospital, in Elkhart, KS.He was born September 19, 1929, at Liberal, KS, to Guy and Frances (Johnson) Waybright.He served in the U.S. Army, during the Korean Conflict, from 1951-1953, with the 13th Engineer Combat Battalion. He attained the rank of Staff Sergeant.He was employed in oilfield work and was owner of Waybright Dirt Construction. He was also a truck driver for Yellow Freight System. He retired in 1994.He was an avid gardener, and a very hard-working man, who could do almost anything with his hands.He was a member of VFW Post # 3166, from 1953-2013, and was an Honorary Retired member of the International Brotherhood of Teamsters – Local Union # 745.He married Delores Marie Fetterman, on July 21, 1950, at Raton, NM. She survives.Other survivors include3 Daughters – Theresa Carlile and husband Jim, of Liberal, KS, Glenda Webb and husband Arden, of Hugoton, KS, Karen Clements and husband Lynn, of Logan, KS;8 Grandchildren – Jennifer Tanner and husband John; Kaitlin Carlile; Jared Webb and wife Alisha; Gabriel Webb and wife Virginia; Joshua Webb and wife Paris; Megan Troyer and husband Tyson; Bethany Clements, and Tiffany Clements;6 Great-Grandchildren – Mersadez, Trevor, and Brendan Tanner; Rebecca, Grant, and Caleb WebbHe was preceded in death by his parents, 3 brothers – Marvin Waybright, Clarence Waybright, and Claudine Waybright; and 5 sisters – Pearl Smith, Opal Stebens, Kathryn Drake, Patty Whiteley, and Evelyn Waybright, who died in infancy.Visitation will be 5 – 8 p.m. Thursday and 9 a.m. – 8 p.m. Friday at Brenneman Funeral Home. The family will be present to receive friends from 6 - 7 p.m. on Friday at the funeral home.Funeral Service will be 11 a.m., Saturday, March 2, at Brenneman Funeral Home Chapel, with Pastor Eric Mason, officiating. Burial will be in Liberal Cemetery.Memorial Contributions may be made to The American Bible Society, (designated for military Bibles), in care of Brenneman Funeral Home, 1212 W. 2nd St., Liberal, KS 67901.

The family of Ervin Waybright created this Life Tributes page to make it easy to share your memories.

Send flowers to the Waybright family.