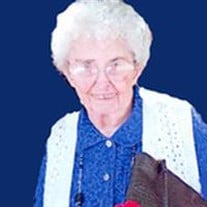 Evelyn Worden Varah, 102, died Monday, April 4th, 2016, at Southwest Medical Center Skilled Nursing Facility in Liberal, KS. She was born on April 6th, 1913, in Albert, Kansas. She was the daughter of Marcena Worden and Clara (Winget) Worden. Evelyn graduated from Great Bend High School, and then attended Hutchinson Junior College. She then graduated from the University of Kansas with a BA in 1933 and an MA in 1934, both in Spanish. She was a member of Phi Beta Kappa. Evelyn worked as a teacher for several years, and then married Ken Varah in 1937. Ken and Evelyn lived in Hutchinson, Dodge City and La Junta, Colorado, before moving to Liberal in 1954. Evelyn taught English at Liberal High School and Seward County Community College. She was active in the First United Methodist Church, Mexican American Ministries, American Association of University Women, PEO, Southwest Medical Center Hospital Auxiliary and the Liberal Memorial Library Board. As a teacher and trainer in the Laubach Literacy Method, she taught English and reading skills to Vietnamese and Hispanic newcomers and prepared them for citizenship. She was honored by former Governor Mike Hayden as an outstanding Kansan and was named to the Kansas Teachers’ Hall of Fame. Survivors include:1 son James Varah Rome, Italy2 daughters Elinor Bowman Asheville, NC Virginia Minturn Denver, CO4 grandchildren: Christine Coon and her husband Kevin, Ken Bowman, Ted Bowman and his wife Yvonne Rogalski. 1 great grandson, Steven Mack Minturn. She was preceded in death by her parents; her brother, John Worden; sisters Rachel Worden and Martha Meisenheimer; and her grandson, Steven J. Minturn. Memorial Services will be held at 3:00 p.m. Wednesday, April 6th, at the First United Methodist Church in Liberal, with Mike Riney presiding. There will be a visitation with the family from 1:30 to 2:30 p.m. In lieu of flowers, the family asks that memorial contributions be sent to Genesis Family Health – Care Center (formerly United Methodist Mexican-American Ministries Care Center) in care of Brenneman Funeral Home 1212 W. 2nd Liberal, KS 67901.Condolences may be sent to the family at www.brennemanfuneralhome.com

The family of Evelyn Worden Varah created this Life Tributes page to make it easy to share your memories.

Send flowers to the Varah family.