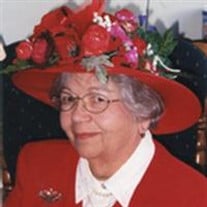 Frances L. Russell, 81, died Sunday, August 9, 2015 at Pioneer Manor in Hugoton, KS.Frances Louise Russell was born on February 21, 1934 in Garden City KS, the daughter of Marion Lynn and Hazel Russell. She was a graduate of Garden City High School and Kansas State University. She spent the majority of her life as a farmer and retail business owner. In 1978, she opened her first business in Garden City. Over the next 20 years, she owned and operated the following businesses: Finial Fabrics, Little Women, SSP Kids, and At Last! Following retirement, she entered her dream job as a fraternity housemother at Kansas State University, first with Sigma Chi Fraternity and then later, for the FarmHouse Fraternity. Following her years as a house mom, she moved to Hugoton, KS, where she enjoyed volunteering as a 4-H Foods leader and sharing her love of baking with others. She was a spokesperson for the Kansas Wheat Commission for many years and enjoyed demonstrating bread making and promoting wheat. She enjoyed sewing and was most proud of the many Hawaiian quilts she recently finished. She will be greatly missed by her three children and three grandchildren. Sons John Russell (Denver, CO), Keith Russell (Steamboat Springs, CO), daughter Nancy Honig and husband Ron of Hugoton, KS, grandsons Stetson Honig (Hugoton) and Finn and Luka Russell (Steamboat Springs), and her sisters Marilynn Arnesman (Boise, ID) and Linda DeMartine (Cheyenne, WY). She was proceeded in death by her parents, and brothers Jim Russell, Richard (Dickey) Russell and foster brother Doyle Moore. Following cremation, a Celebration of Life Service will be held at the First Christian Church in Hugoton on Saturday, September 5th at 9:30 a.m. Internment will be at Valley View Cemetery in Garden City at 1:30 p.m. on the same day. The family will receive friends from 6:30 – 8:00 p.m. on Friday, Sept. 4th at First Christian Church, 600 S. Van Buren in Hugoton.Memorial contributions have been designated to the KSU FarmHouse Fraternity Housemother Scholarship or to the KSU Foundation Scholarship in Memory of Lynn and Hazel Russell in care of Brenneman Funeral Home 1212 W. 2nd Liberal, KS 67901.

The family of Frances L. Russell created this Life Tributes page to make it easy to share your memories.

Send flowers to the Russell family.