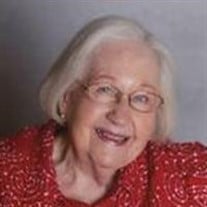 Gladys Grace (Ridenour) Schmitt Gladys Grace (Ridenour) Schmitt laid aside the burdens of life to enter the peaceful rest of her Savior on the afternoon of Tuesday, March 22, 2016, aged a courageous 90 years 9 months and 9 days. On Flag Day, June 14, 1925, Gladys began life in the loving arms of her mother, Irene Elma (Wear) Ridenour and father, Adam Otto Ridenour, on a farm and cattle ranch upon the banks of the Cimarron River in far northwest Seward county. Riding on horseback to the Ethelton country school as a young girl, she had many funny stories of how she and her brother Richard hauled drinking water to class and shot rabbits for the family dinner on the way home from school. It was during this time, she fondly recalled one of her most cherished childhood memories of one Christmas during the Great Depression and Dust Bowl. Money for Christmas gifts was scarce so her brothers mended and polished her brown shoes late Christmas Eve as her Christmas morning gift. She called it her Brown-Shoe Christmas. After her mother began administering the school hot-lunch program, Gladys attended Kismet schools. Indeed, as if by kismet, Gladys began working odd jobs in Liberal where her path soon crossed with that of Edward Carl Schmitt, the love of her life and owner of a brand-new red 1941 Plymouth. Gladys said of their courtship, “Ed and I hit it off right away and got married.” That was on October 11, 1942. Each June 14th from then on, Edward would remark, “It’s Mama’s birthday, the flags are flying high!” The couple’s married life began north of Liberal on a farm, which Edward, with the help of his brother Lawrence C. “Old Guy” Schmitt, purchased by working for the Works Progress Administration. Soon after marrying, the blessing of children claimed the couple, and by the time she was 30, Gladys was raising six kids. She arose to the challenge of cooking three meals a day for nine (or more) people! As the children grew, activities such as 4-H, Extension Homemakers Unit, and camping trips in the Colorado mountains became normal punctuations to western Kansas farm life in the 1950s and 60s. As motherhood blossomed to grandmother-hood in the 70s and 80s, she found herself busy as ever with twelve grandchildren. She was part of everything from band concerts and piano recitals to swimming lessons and livestock shows. One would be amiss not to mention the wiener roasts she and Ed hosted for the grandkids. Another special grandkid activity of hers was hosting Easter-egg-dying parties. Eggs, sloshing and splashing dye, and lots of grandkids. What could go wrong? She and Ed even commemorated their impending 40th anniversary with the purchase of a new 1981 Plymouth, but in yellow. Finally, with the close of the last century and dawning of the new, her nest, grew ever more crowded with the addition of great-grandchildren. As one well acquainted with life, Gladys experienced more than her share of heartache and loss. Her son Lawrence O. Schmitt passed from this life in October 1959. Following this, daughter Betty Irene Schmitt entered rest in May 1969. After 59 years of marriage, Gladys’ one great love E. C. Schmitt crossed into heavenly rest on July 4, 2002. Lastly, her eldest son Terryl Keith Schmitt departed earthly life in August 2006. Other loved ones preceding Gladys in death are grandson Matthew James Schmitt, brothers Jim Ridenour, Walter L. Ridenour, Richard Ridenour, Paul Ridenour, Dean Ridenour, and sister Rosalie Schawo. Left behind to celebrate her life are three children, all of Liberal: son Edward L. Schmitt and wife Luanne, son Dennis G. Schmitt and wife Patricia, and daughter Janet D. Wares, twelve grandchildren and thirteen great-grandchildren. Also cherishing her memory are two brothers, Don Ridenour, Hampton, VA, and Robert Ridenour, Kansas City, KS. And 2 sisters-in-laws, Sue Ridenour and Margo Ridenour. Visitation will be Friday, March 25, 2016, from 9 AM to 8 PM at Brenneman Funeral Home with family present from 6 to 8 PM To those wishing to join in celebrating this wonderful woman of life and love, please gather with the family on Saturday, March 26, 2016 at 1:00 PM at the First Southern Baptist Church in Liberal. In lieu of flowers, at the family’s request, memorials may be made to the charity of one’s choice in care of Brenneman Funeral Home, 1212 W. 2nd St., Liberal, Kansas 67901.Condolences may be sent to the family at www.brennemanfuneralhome.com

The family of Gladys Grace Schmitt created this Life Tributes page to make it easy to share your memories.

Send flowers to the Schmitt family.