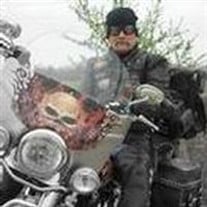 James Benjamin “Bennie” Wilson, 62, of Liberal, died Monday, September 10, 2012, at Rush Hospital in Meridian, Mississippi, as a result of a motorcycle accident. He was born April 30, 1950, in Guymon, Oklahoma, the son of Woodrow B. and Lucille (Ellington) Wilson.He attended Liberal Schools graduating from Liberal High School with the class of 1968. Bennie was employed for Nabisco/Kraft Foods for over 30 years. Upon his retirement, he worked for the Advantage Co for 6 years. One of Bennie’s greatest joys was road trips on his Harley with his biking buddies. He was also an avid hunter and fisherman. He was a member of the First Southern Baptist Church in Liberal and the Wednesday morning prayer group.Bennie is survived by his son, James B. Wilson and wife Selena of Colby, KS, his daughter Natalie Dee Wilson of Oklahoma City, OK, one brother, Dan Woodrow Wilson and wife Karelyn of Kechi, KS, and 3 sisters, Cinda Lou Garrison and husband Dennis of Lawrence, KS, Janeen Brown and husband Ernie of WaKeeney, KS, Ann Shaeffer of BelAire, KS, one uncle, William F. “Uncle Bill” Ellington of Groom,Texas. He is also survived by a step daughter, three grandchildren and many nieces, nephews and friends. Bennie was preceded in death by his parents and an infant son, Steven Wilson.Visitation will be from 1-4 pm on Sunday, September 16th with the family present to greet friends at Brenneman Funeral Home. In lieu of flowers and plants, the family requests memorial contributions to the First Southern Baptist Church or the Susan G. Komen Foundation in care of Brenneman Funeral Home at 1212 W. 2nd Street, Liberal, KS 67901.

The family of James "Bennie" Benjamin Wilson created this Life Tributes page to make it easy to share your memories.