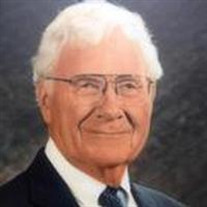 James Richard Yoxall, 88, died December 12, 2014, in Wichita Kansas. He was born October 25, 1926 to Richard and Claire (Marshall) Yoxall. James married Constance Cooper Clarke in Topeka, Kansas on April 7, 1951. They had three children, Richard Yoxall, Douglas Yoxall, and Bonnie (Yoxall) Frederick, followed by two grandchildren, Ashlee Yoxall and Logan Yoxall and two great-grandchildren, Zander Darius Baker and Kaizen Ross Bluitt.James attended school in WaKeeney, Kansas, until transferring his senior year in high school to Kemper Military School in Booneville, Missouri. He graduated near the top of his class at Kemper and was selected as an alternate to the U.S. Naval Academy.James enlisted in the U.S. Navy following high school graduation in 1944 and served until June, 1946 with both state-side Officer Training and one tour of sea duty aboard the USS John Land around the Philippine Islands. He graduated with a Bachelor of Arts Degree in Political Science in June, 1948 from the University of Kansas, where he was one of the founding members of the Lambda Chi fraternity. He graduated from Washburn University Law School in February, 1951 with a Juris Doctorate.James went to work as a practicing attorney in the private practice of law immediately after graduation from Law School. The law firm that he joined originally commenced in 1916 by George L. Light, who was later appointed in 1926 as the first judge of the newly organized 39th Judicial District for the State of Kansas. James was admitted to practice before the Supreme Court of Kansas, Federal District Courts, and the United States Supreme Court. He was a member of the Seward-Haskell County Bar Associations, the Southwest Kansas Bar Association, the Kansas Bar Association, the American Bar Association, and the American College of Trust and Estate Counsel. James received his 50-year pin from the Kansas Bar Association in 2001. He also served as Secretary/Treasurer of the Kansas Bar Association for four years and as a member of the Kansas Bar Association Executive Council. James was a member of the Washburn Law School Association and served on the Board of Governors of its Law School from 1987-1995. James received Boss of the Year Award twice from the MSS Legal Secretaries Association.He served as a Trustee of the Baughman Foundation since 1970 and as a member of the Board of Directors on numerous corporations. James was a member of the Liberal, Kansas Jaycees Association, where he served as Secretary/Treasurer, Vice-President, and President. He received the Distinguished Service Award, together with numerous other honors from both the Liberal and the Kansas Jaycees organizations.He was Chairman or Co-Chairman of numerous activities, including Pancake Day and the Five-State Fair & Race Meet. He was a member of the Liberal Noon Kiwanis Club for nearly thirty years and served in all offices, including President and as a Lieutenant Governor. He has been a member of the Lutheran church in WaKeeney and of Episcopal churches in Liberal, Kerrville, Texas, and Wichita. He served as a member of the Vestry on numerous occasions for many years. He also served as a member of various church committees, such as the Finance Committee and the Church Foundation.James enjoyed travelling internationally for business and for pleasure. He was committed to taking the best possible care of his clients, for whom he cared deeply. He was a bright, kind, compassionate, and patient person with a strong sense of integrity and of deep faith. He will be dearly missed by his family and others whose lives he touched.A Memorial Service will be held 11:00 AM Tuesday, December 16th at First Presbyterian Church, 1551 N Western, Liberal, with The Reverend Andrew T. O’Connor presiding.Visitation will be 6:30 – 8:00 pm on Monday, with the family present to greet friends at Brenneman Funeral Home.In lieu of flowers, the family suggests that contributions may be made to Washburn Law School or to Good Shepherd Episcopal Church in Maize, Kansas in care of the Brenneman Funeral Home 1212 W. 2nd Liberal, KS 67901.

The family of James Richard Yoxall created this Life Tributes page to make it easy to share your memories.

Send flowers to the Yoxall family.