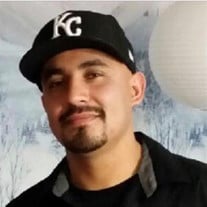 Jesus Vicente Herrera, 34, died Saturday, May 18, 2019 near Epping, North Dakota. He was born on August 17, 1984, the son of Inocente and Rosa Maria (Aguirre) Herrera, in Hidalgo Del Parral, Chihuahua, Mexico. Jesus worked as an oil field hand for Brigade Energy Services. Jesus was a loving son, brother, uncle and father. His laugh, his smile and his beautiful big eyes will always be remembered. Survivors include: His Parents, Inocente and Rosa Maria Herrera 2 daughters Edith and Valentina Herrera California 1 Brother Marco Antonio Herrera Indianapolis, IN 3 Sisters Jaquelinne Herrera Indianapolis, IN Korina Herrera-Mancillas and her husband Rogelio Indianapolis, IN Laritza Herrera-Pablo and her husband Roger Indianapolis, IN Nieces and Nephews Genesis and Grecia Garcia, Andres, Jaylah and Janney Mancillas, Kamila and Nailah Pablo. He was preceded in death by his grandparents; Epigmenio and Victoria Aguirre and Jose and Tomasa Herrera; and a sister, Elsa Korina Herrera. Visitation will be from 11am-5pm Saturday, May 25 and 12pm-5pm Sunday, May 26, at Brenneman Funeral Home. Rosary will be at 7pm, Sunday, May 26, at Saint Anthony of Padua Catholic Church. Funeral Mass will be 2pm Monday, May 27 at Saint Anthony of Padua Catholic Church with Father James Dieker presiding. Memorial contributions may be sent to Angels For Animals, in care of the Brenneman Funeral Home 1212 W. 2nd Liberal, KS 67901. Condolences may be sent to the family at www.brennemanfuneralhome.com

The family of Jesus Vicente Herrera created this Life Tributes page to make it easy to share your memories.

Send flowers to the Herrera family.