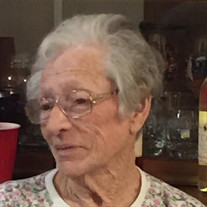 Joan Etta Collins, 86, died September 2, 2020 at the Good Samaritan Society in Liberal, Kansas. Joan was born on November 15, 1933. She is the daughter of George Henage and Amy Gladys Ormiston Henage in Eldon, Colorado. On September 30, 1949, Joan married Loren Lee Collins in Clayton, New Mexico. They were married 61 years before his death in 2010. Together they raised 6 beautiful children. They were also the proud grandparents of 7 grandchildren and 10 Great-grandchildren. Joan was passionate about her family and friends. She cared about through plentiful meals and endless love. She enjoyed providing comfort foods for family and friends. She was also a member of First Nazarene Church. She co-owned Merit Radiator Services, but also had several jobs as: a maid at the Holiday Motel, carhop at the Snack Shack, she ironed clothes for people and worked at Blacks Drug Store. She was an involved member of the International Order of Odd Fellows and was a Rebecca, Grand Canton, and Theto-Roh. Joan is survived by Sons: Everett Collins of Liberal, Kansas Charles Collins of Houston, Texas Lewis Collins of Perryton, Texas John Collins of Liberal, Kansas Daughter: Lori Ann Benton-Merz and her husband Steve of Liberal, Kansas Brothers: Jimmy Henage of Mobile, Alabama Melvin Henage of Wilmer, Alabama Sisters: Teri Lexan Fox of New Castle, Oklahoma Cinda Sisneros of Lubbock, Texas Joan was preceded in death by her parents, George and Amy, her husband, Loren, son, Kenneth Collins, sisters, Shirley Caldwell, Billy Dreher, Gaylynn Livengood-Caldwell, and brother, George E. Henage Visitation will be Monday September 7th, from 2:00 PM to 4:00 PM, the family will be present during that time to greet family and friends. Funeral Service will be Tuesday September 8th at 10:00 AM at the Hornung Family Funeral Home Chapel, 1212 West 2nd Street, Liberal, Kansas 67901. Interment will be in the Restlawn Cemetery. Memorial contributions may be sent to The Good Samaritan Society, in care of the Hornung Family Funeral Home 1212 W. 2nd Liberal, KS 67901.Condolences may be sent to the family at www.hornungfuneralhome.com

Joan Etta Collins, 86, died September 2, 2020 at the Good Samaritan Society in Liberal, Kansas. Joan was born on November 15, 1933. She is the daughter of George Henage and Amy Gladys Ormiston Henage in Eldon, Colorado. On September 30, 1949,... View Obituary & Service Information

The family of Joan Etta Collins created this Life Tributes page to make it easy to share your memories.

Send flowers to the Collins family.