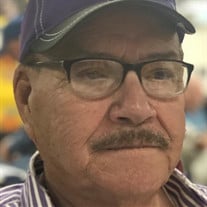 John C. Martinez, age 81, passed away on Tuesday, December 1, 2020 at Satanta District Hospital in Satanta, Kansas. John was born April 23, 1939 in Liberal, Kansas the son of Joe Martinez and Simona Jiron Martinez. John graduated from Liberal High School in 1959. He was a talented athlete who played multiple sports including high school football, as a starting lineman for four years. In addition to playing sports, he was an avid supporter of the Liberal Redskins, Seward County Saints and Liberal Bee Jays. He followed his teams all over the state for tournaments and proudly wore the team colors and mascots on his ball caps and shirts which he had for every occasion. As for the Wildcats and Jayhawks, he did not play favorites, he cheered for whoever was winning. He served in the U.S. Army National Guard from 1957 to 1961 in of the 161st Field Artillery, Battery “B”. He then served 3 years in the U.S. Army Reserves. John married Elise Serrato Delgado, the love of his life May 5, 1961 in Liberal, KS. They enjoyed many happy years together sharing their love of animals, traveling, listening to music, going to Vegas, bird watching, and spending time with family. Elsie preceded John in death on December 15, 2002. John was a Track Supervisor and Section Forman for Rock Island Railroad, Cotton Belt Southern Pacific Railroad and Union Pacific Railroad. He was the Secretary and treasurer for the BMWDE of the Local 1270 Railroad Union. He was a 4th Degree Knight of the Knights of Columbus belonging to Counsel 3381, Assembly 1302 and belonged to the American Legion Post #80. John had an adventurous spirit and proudly shared with his family his love of travel. He took his family on many vacations including Yellowstone, Las Vegas, Arizona and his beloved Garden of the Gods in Colorado Springs and Red River, New Mexico. He loved to go fishing with his older brother Joe and grandkids. John was a jokester who did not know a stranger and had a nickname for everyone. He will be missed by many in the community who appreciated his friendly smile and kindness. Survived by His Wife, Rosa Duran. Two sons John “Tony” (Linda) Martinez and Carlos Ray (Charity) Martinez both of Liberal, Kansas. Two daughters Lisa (Scott) Beeson of Liberal, Kansas and Mechelle F. Martinez (Rachel Whetstone) of Manhattan, Kansas Ten Grandchildren Anthony Martinez, Jordan Beeson, Isabel Martinez, Josh Beeson, Tristan Martinez, Jacob Beeson, Kylie Ware, Landon Martinez, Easton Martinez and Ryleigh Martinez. Six Great Grandchildren. Brother Lino Martinez of Birmingham, Alabama Sister Virginia Gonzales of Liberal, Kansas He is preceded in death by his parents, wife Elsie Martinez in December 15, 2002, brothers, Jimmy Camilo, Soloman Alires and Joe Martinez, sisters Vicky Serrato, Clara Alires, Lola Mayer and Carmin Duran. Visitation will be held on Monday, December 7, 2020 at the Hornung Family Funeral Home 1212 W. 2nd Liberal, Kansas from 12pm to 5pm. The Rosary and vigil service will be at 7:30pm on Monday, December 7, 2020 at the St. Anthony Catholic Church, 1510 N. Calhoun, Liberal Kansas. Funeral Mass will be held Tuesday, December 8, 2020 at 10:30am at the St. Anthony Catholic Church 1510 N. Calhoun, Liberal Kansas. To attend the service virtually go to the Hornung Family Funeral Home Facebook page, Like the page and the live stream will begin at the time of the services. Memorial contributions suggested to Knights of Columbus Scholarship Fund or Angels for Animals in care of the Hornung Family Funeral Home 1212 W. 2nd Liberal, KS 67901. Condolences may be sent to the family at www.hornungfuneralhome.com

The family of John C. Martinez created this Life Tributes page to make it easy to share your memories.

Send flowers to the Martinez family.