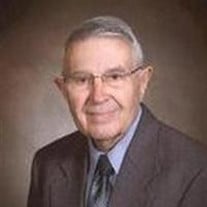 BRENNEMAN FUNERAL HOME1212 W. 2ndLIBERAL, KS 67901 620-624-5647 PAID Obituary Photo - YesDATELINE – Liberal, KS John Shockley was born April 6, 1930, to Ed and Erna DeHarde Shockley in Tucumcari, New Mexico. He passed away on February 12, 2013 in Wichita, Kansas. He graduated from Tucumcari High School in 1950 where he was an outstanding athlete lettering all four years in football, basketball and track. He also served as President of the Student Council and Future Farmers of America. He graduated from Wayland University in Plainview, Texas in 1955. He married his childhood sweetheart, Patricia Schoonover, on December 24, 1950 at Wayland University, Plainview, Texas. They moved to Baker, Oklahoma after graduation where he was engaged in farming, ranching, and trucking. After moving to Liberal, Kansas in 1963, he was employed by Anadarko Production, Tradewinds Industries, National Beef, and taught truck driving at the Liberal Area Technical School. He was a lifelong gardener who enjoyed sharing his flowers and loved being surrounded by his family. He was a member of the First United Methodist Church of Liberal and was a lay speaker and Sunday school teacher for many years. He is survived by his wife Pat, a daughter Sheryl Bohannan and husband Tim of Liberal, KS, a son Michael Mark Shockley and wife June of Wichita, KS, four grandchildren, Christopher Hibbert and Nicole of Tomball, TX, Candice Behrns and husband Jeff of Park City, KS, and Kenneth and Allen Shockley, both of Wichita, KS, and four great grandchildren, Mariah and Alexis Behrns of Park City, KS and Paige and Hatton Smith of Tomball, TX.Memorial service will be 2:00 p.m., Friday, March 22, 2013 at Brenneman Funeral Home Chapel with Pastor David Randall presiding. Memorials have been established for the Harry Hynes Memorial Hospice in Wichita and for scholarships at the Seward County Community College/Area Technical School Foundation for the Trucking Driving Program in Liberal. Contributions can be sent in care of Brenneman Funeral Home 1212 W. 2nd Liberal, KS 67901.

The family of John Shockley created this Life Tributes page to make it easy to share your memories.

Send flowers to the Shockley family.