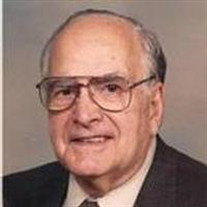 John W. “Jack” Toole, age 93, died April 20, 2012 at Southwest Medical Center in Liberal, KS. He was born January 7, 1919 at Scottsbluff, Nebraska, the son of Lemuel and Minnie Olive (Lanham) Toole.He graduated in 1935 from Stromsburg High School, Stromsburg, NE. In 1940, Jack received a Bachelor Degree in Chemical Engineering at the University of Nebraska. He was active with ROTC finishing as a Cadet 1st Lt. Jack was a WWII veteran serving in the U. S. Army from 1942–1946. On March 5, 1942, he married Bonnie B. (Rixstine) at Washington, D.C. She survives.He worked as the Director of Laboratory Services for Northern Natural Gas retiring in 1985. He enjoyed being Dad to his two daughters.He was a member of the First Presbyterian Church in Liberal where he was an Elder, sang in the church choir and was a pianist. He had been very active with Masonic Fargo Lodge #300, Median Shrine, and Scottish Rite. He was also belonged to the American Legion Post No. 80. Other survivors includeDaughter – Patricia Jo Kleppinger of South Burlington, VTSon-in-law – Dr. David Tucker of Wichita Falls, TX2 Grandchildren – Grandson, Mark Duy and Granddaughter, Susan Tedrow and fiancé Greg Jackson5 Great-GrandchildrenNephew – Douglas Rixstine and wife Onece of Lynn, ALNiece – Barbara (Rixstine) Danielson and husband Jim of Lincoln, NEHe was preceded in death by Daughter, Nancy Tucker and Son-in-law, Dale Kleppinger.Funeral service will be 2:00 pm Saturday, April 28, 2012 at the First Presbyterian Church in Liberal, KS with Pastor Stephen Saville presiding. Military honors will be given by the American Legion Post 80. Graveside service will be 2:00 pm Tuesday, May 1st at Wyuka Cemetery, Lincoln, NE.Visitation will be 9 am – 8 pm Friday at Brenneman Funeral Home.Memorial contributions may be made to First Presbyterian Church or Masonic Fargo Lodge #300 in care of Brenneman Funeral Home 1212 W. 2nd Liberal, KS 67901.

The family of John W. Toole created this Life Tributes page to make it easy to share your memories.

Send flowers to the Toole family.