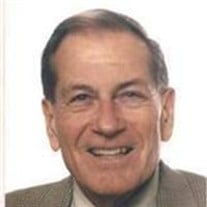 GEORGETOWN, Texas – John Max Zimmerman 84, died, Tuesday, May 31, 2016 in Georgetown, Texas. He was born Dec. 9, 1931 in Liberal, the son of Donald Kent and Rayta Sarah Zimmerman.He married Kathleen Rearden on May 4, 1953 in Fort Worth, TX. She preceded him in death on March 15, 1993. He married Jacqueline Ann Usry Holcomb on Aug 5, 1995 in Colorado Springs, Colo. She survives. He graduated from Liberal High School in 1950. After graduation from high school, he furthered his education at the University of Kansas and graduated in 1954. In 1950, while attending the University of Kansas he joined the ROTC and remained in military service until 1957. He was a Captain in the United States Air Force and was a navigator on a B-36 Bomber during the Korean Conflict. He was a member of the Liberal Noon Lions Club, Rotary Club and the Masonic Lodge AF & AM and the Southwest Shriners Club. He was instrumental in the development of some of Liberal’s leading tourist attractions, including Dorothy’s House, the Land of Oz exhibit and the Mid-America Air Museum. He also spurred the effort to save and revitalize the Rock Island Depot and Grier House buildings. Zimmerman also started a coalition of communities along Highway 54 in an effort to coordinate efforts for four-lane expansion from Wichita to El Paso, an effort that continues.He was the owner and agent for Zimmerman Insurance Agency in Liberal.Survivors also include son, Timothy Zimmerman and wife, Susan; stepsons, Murray Holcomb and Keith Holcomb; daughter, Jane O’Neill and husband, Steve; four grandchildren; and three step-grandchildren.He was also preceded in death by his parents; and sister, Joan Collison. • Memorial services will be at 10 a.m. on Thursday, June 9, 2016 at the First United Methodist Church. A private graveside service will take place at Liberal Cemetery. Friends may call from 1 to 8 p.m. on Wednesday, June 8, with the family present from 6 to 8 p.m. at Brenneman Funeral Home.Memorials are suggested to the Coronado Museum or the Mid America Air Museum in care of Brenneman Funeral Home 1212 W. 2nd Liberal, KS 67901. The family has requested donations be made to the Coronado Museum building project.

The family of John Max Zimmerman created this Life Tributes page to make it easy to share your memories.

Send flowers to the Zimmerman family.