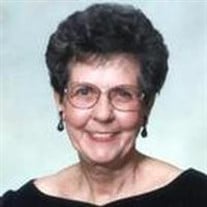 Karen Lee (Hatfield) Stillwell, age 81, passed away at Southwest Medical Center in Liberal, KS on August 30, 2014. She was born in Liberal, Kansas on October 16, 1932 to Dr. Orville Lee and Donita (Love) Hatfield. She was married to Paul Stillwell on September 6, 1953, in Hobart, Oklahoma.Karen graduated from Liberal High School in the class of 1950. She was drum major of the high school band for four years. She attended Oklahoma College for Women in Chickasha, OK for one year and then transferred to the University of Oklahoma where she majored in home economics.She was an active member of Chi Omega sorority at OU and met Paul there. Their first home was in Killeen, Texas where Paul was stationed in the US Army. When Paul was sent overseas, Karen returned to Liberal to stay with her parents. Upon release from service, they moved back to Liberal in 1955. In 1962 they moved to Oklahoma City, then to Detroit in 1966, and back to Oklahoma City in 1971. They built a home in Severna Park, Maryland in 1977 and retired there in 1997, after living in Chicago, Atlanta, Nyack, NY, and Mahwah, NJ.They returned to Oklahoma City in 2002 to be nearer to their family.Karen came back to Liberal in 2007 to care for Donita, her mother, and has spent most of her time since then in Liberal where she has many friends and classmates.She is survived by her husband Paul, her son Dr. Mark Stillwell and wife Judi of Fayetteville, Arkansas, and her two grandsons, Kevin of Urbana, Illinois, and Chris of Seoul, South Korea. Her two precious dogs, Lillie and Sugar, miss her greatly.Funeral service will be held at Faith Tabernacle on Saturday, September 13th at 10:00 a.m. with Pastor Rex Petty presiding. Burial will follow at Liberal Cemetery.Viewing will be held 1 – 5 pm Sunday, September 7th at Brenneman Funeral Home.In lieu of flowers, donations may be made to Angels for Animals, one of her favorite charities, in care of Brenneman Funeral Home 1212 W. 2nd Liberal, KS 67901.

Karen Lee (Hatfield) Stillwell, age 81, passed away at Southwest Medical Center in Liberal, KS on August 30, 2014. She was born in Liberal, Kansas on October 16, 1932 to Dr. Orville Lee and Donita (Love) Hatfield. She was married to Paul Stillwell... View Obituary & Service Information

The family of Karen L. Stillwell created this Life Tributes page to make it easy to share your memories.

Send flowers to the Stillwell family.