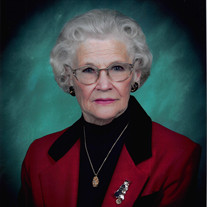 Katie L. Bailey, 96, of Liberal, died Saturday, March 31, 2018, at her son’s residence in Arvada, Colorado. She was born on March 24, 1922, the daughter of Minnie & Claudie L. Glasgow. She attended high school in Ola, Arkansas. Katie worked as a bookkeeper for Bailey and Son Machine before retiring. On May 19, 1939, she married Virgil C. Bailey Jr., in Ola, Arkansas. He preceded her in death on July 31, 1996. Virgil was stationed in Liberal during WWII, and they had resided in Liberal since then. Katie enjoyed sewing, accompanying her son Gary on scuba diving trips and traveling with him. She also enjoyed spending time with her friends and family. Survivors include: Sons Gary Bailey Arvada, CO Daughters Doneta Dudley and her husband Tommy Kansas City, KS Grandchildren 1 grandson Philip Dudley And several great grandchildren Katie was preceded in death by her parents, her husband, 1 brother, Don Glasgow, 2 sisters, Minnie G. Crow and Claudia Humphreys, and one granddaughter Kimberly Dudley. Funeral Services will be at 10:30 am Saturday, April 7, at Western Avenue Church of Christ with Pastor Glen Walton presiding. Burial will follow at the Restlawn Cemetery. Visitation will be Friday, April 6, at the Brenneman Funeral Home from 9am to 8pm. To leave a message of condolence for the family, please call the funeral home at 620-624-5647 or visit our website at www.brennemanfuneralhome.com. In lieu of flowers, memorial contributions may be made to the Western Avenue Church of Christ, in care of the Brenneman Funeral Home 1212 W. 2nd Liberal, KS 67901.

The family of Katie L. Bailey created this Life Tributes page to make it easy to share your memories.

Send flowers to the Bailey family.