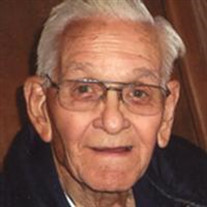 Lawrence James Smith, 84, died September 5, 2015 at Wheatridge Park Care Center, Liberal, KS.He was born October 7, 1930 at Montezuma, KS, the son of John H. and Katie (Jantz) Smith. He was a 1948 graduate of Montezuma High School and attended one year of college ant Kansas State University. He served in the U. S. Army from 1956-58 and then two years in the Army Reserves.After the military, Lawrence went back to work for his father on the farm. He had began running the tractor at the young age of 7 years old. He later moved to Liberal where he used his training in welding, that he received in the Army, to work as a mechanic and body repair at Smith Craig Motors and then at Stu Emmerts. He then opened his own shop, Smith’s Body Shop, which he operated for 15 years. Later, he worked 10 years for Dillons doing Pharmacy and floral delivery.He had a knack for making things work whether it was a clock, a watch or an automobile. In his body shop business, he was very charitable and honest. He was also a musician playing the organ, piano, accordion and guitar.On February 5, 1956, he married Norma Opal Vaughn in Clayton, NM.She survives. Other survivors include,one daughter, Brenda Cordova and husband Herman of Liberal, KS;two grandchildren, Anthony Cordova of Ft. Worth, TX and Stephanie Cordova of Dallas, TX.two brothers, Keller Smith and wife Harriet and Allen Smith and wife Patty both of Headland, AL;two sisters, Neva Pointer and husband Dean of Ulysses, KS and Neoma Keith of Ft. Worth, TX.He was preceded in death by his parents, a brother, Lester Smith and a sister Delores Keith.Funeral service will be 10:00 am Wednesday, Sept. 9, 2015 at Fellowship Baptist Church, Liberal, KS with Pastor Bill Prater presiding. Burial will follow at Liberal Cemetery with Military Honors given by American Legion Post #80.Visitation will be 1 – 8 pm on Tuesday at Brenneman Funeral Home.Memorial contributions may be made to the Lawrence Smith Memorial Fund in care of Brenneman Funeral Home, 1212 W. 2nd Liberal, KS 67901.

The family of Lawrence James Smith created this Life Tributes page to make it easy to share your memories.

Send flowers to the Smith family.