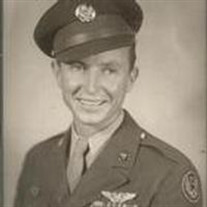 Leon Russell Tabor, 91, passed from this life Wednesday, November 5, 2014 at Southwest Medical Center in Liberal, KS. He was born September 18, 1923 in Floydada, TX to Daniel Franklin Tabor and Iva Ann Willis Tabor. The family moved to a farm near Causey, New Mexico. After graduating as Valedictorian of his high school class in Causey, Leon hitchhiked to California where he worked in the Oakland Military Shipyards, before enlisting in the Army Air Corps, at age 19, on June 24, 1943. He served as a tail-gunner on a B-24 bomber in missions over Nazi-occupied Europe. One year later he was shot down in a bombing raid over Romania. He was wounded in the mission and 2 of his fellow crewmen were killed. Leon captured and held as a prisoner of war. He was awarded the Distinguished Flying Cross and the Purple Heart for his military service in World War II. Returning to the states Leon married Billie Jim Sikes on April 13, 1946, in Roswell, New Mexico. Leon earned a Bachelor and Masters Degree from Texas Tech University. He taught agriculture, shop, science and elementary classes in Texas, Oklahoma and Kansas, including teaching at Sunset School, a one room school house in Oklahoma. After moving to Liberal, KS in 1968, he established Leon Tabor Realty where he enjoyed working with his daughter, Janie Rine for over 25 years. As a member at Western Avenue Church of Christ, he served many years as an elder. He loved mission work and actively supported missionaries in many parts of the world, especially in Romania, where he had been a POW during World War II. Leon is survived by: Son- Gary Tabor and wife Donna of Olympia, WA, Daughter- Janie Rine and husband David of Liberal, Son Jay Tabor and wife Susan, Dallas, TX, and Son-in-law Jerald Harris, Follett, TX. Leon is survived by 11 grandchildren, and 10 great grandchildren. Surviving siblings are sister Ruby Laney of Caney, OK and brother Curtis Tabor and wife Billie of Clovis, New Mexico. Leon was preceded in death by his parents, wife Billie and daughter Linda Tabor Harris and 1 great grandchild, Brooke. Visitation will be Friday, November 7, 2014 from 9:00 A.M. to 8:00 p.m. at Brenneman Funeral Home at 1212 W 2nd St. Liberal, KS. The family will be present from 5:00-6:00 P.M. to greet friends. Funeral Services will be at 10:30 a.m. Saturday, November 8, 2914 at the Western Avenue Church of Christ followed by internment at Restlawn Memorial Gardens Cemetery in Liberal. The family suggests memorials to the Romanian Mission Fund c/o Ovilla Church of Christ, 3420 Ovilla Road, Ovilla, TX 75154 or New Mexico Christian Childrens Home, 1356 NM236, Portales, New Mexico 88130, In Search of the Lord’s Way P.O. Box 371, Edmond, OK. 73083. or charity of your choice.

The family of Leon Russell Tabor created this Life Tributes page to make it easy to share your memories.

Send flowers to the Tabor family.