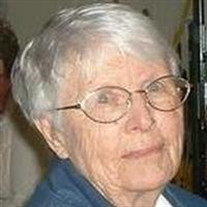 Mary Pauline Weaver 98, died Monday, November 5, 2012 at Wheatridge Park Care Center in Liberal, KS. She was born November 9, 1913 in Cleveland, OK the daughter of Frank Moulder. She had been a resident of the Liberal area for many years. She... View Obituary & Service Information

The family of Mary Pauline Weaver created this Life Tributes page to make it easy to share your memories.

Send flowers to the Weaver family.