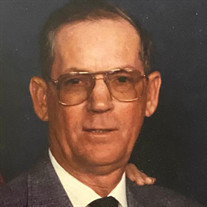 Maurice Dean “Mose” Richardson, age 88, of Liberal, Kansas died on Tuesday, December 1, 2020, at University of Kansas Medical Center in Kansas City, Kansas. Maurice was born March 23,1932 in Luray, Kansas the son of Mack and Emma (Baird) Richardson. He graduated from High school in Luray, Kansas and served in the United States Air Force. He married Doris Darlene (Letsch) Richardson on March 6, 1952 in Cheyenne, Wyoming. They were married for 65 years and together for over 70 years. Doris preceded him in death in 2017. Mose loved his cars and trucks. He was the owner of Richardson Trucking and he had the distinction of hauling the first load of cattle into National Beef Packers Plant in 1969 when it first opened. Mose hauled Cattle throughout the Midwest for NBP and relocated his family from Luray, KS to Liberal when the plant was built. Prior to hauling cattle, Mose operated a pool hall in Luray for 14 years. Mose spent 37 years with National Carriers Inc. before retiring from driving, but he still remained an important figure in the family business. He was proud of that length of service with NCI and his best memory was that he had a check every week and this was always good. He could not remember anything bad about working for NCI. In his spare time, Mose enjoyed participating in the sport of racing with his family. Mose owned numerous race cars over the years including midgets and sprint cars. Mose is survived by his 2 sons Gary Richardson and his wife Karan and Randy Richardson both of Liberal, Kansas. His daughter Brenda Richardson of Wichita, Kansas. Mose was the proud grandfather of 2 grandsons Steven and Cary Richardson and 1 great grandson Cory Richardson. He is survived by his sister Arlene Wetzler of Stockton, Kansas. He was preceded in death by his parents, Malcom (Mack) and Emma Richardson, his wife Doris, and his 3 Brothers Nolan (Sam) Richardson, Johnny Richardson, and Mack (Buster) Richardson Jr. Visitation will be Friday, December 11, 2020 from 11:00 AM to 2:00 PM. A Funeral Service honoring Mr. Richardson will be held following at 2:00 PM with Pastor Rex Petty presiding. Both will be at the Hornung Family Funeral Home Chapel, 1212 West 2nd Street, Liberal, Kansas. Interment will be in the Liberal Cemetery. Attendance at the service will require that a mask be worn at all time and social distancing be observed. Memorial Contribution’s suggested to the American Legion Post #80 or a charity of your choice, in care of the Hornung Family Funeral Home 1212 W. 2nd Liberal, KS 67901.

The family of Maurice Dean "Mose" Richardson created this Life Tributes page to make it easy to share your memories.

Send flowers to the Richardson family.