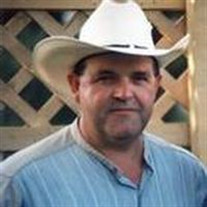 Michael E. Russell, 61, of Liberal, died August 7, 2013, at Southwest Medical Center.He was born November 23, 1951, at Duncan, OK, to Walter and Fannie Marie (Beavers) Russell.He graduated from High School at Bray, OK, in 1970.He was employed by the City of Liberal. Prior to that, he worked for Halliburton as an acid-treater, retiring after 35 years.He was a member of Central Christian Church, NRA, and the Liberal Shooting Club.He married Kathryn Smith, on July 11, 1997, at Beaver, OK. She survives.Other Survivors Include:2 Daughters – Christi Jones, of Virginia Beach, VA Becky Roose, of Farmington, MO1 Sister – Charlotte Jones, of Marlow, OK4 GrandchildrenMany nieces and nephewsHe was preceded in death by his parents.Memorial Service will be held at 10:00 am, Saturday, August 10, 2013, at Central Christian Church, in Liberal, with Pastor Chuck Scroggs officiating.Burial will be in Pioneer Cemetery, in Beaver, OK, at a later date.Memorial Contributions may be sent to Southwest Miracles Inc or Central Christian Church, in care of Brenneman Funeral Home, 1212 W. 2nd St., Liberal, KS.

The family of Michael E. Russell created this Life Tributes page to make it easy to share your memories.

Send flowers to the Russell family.