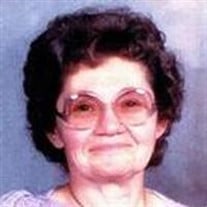 Mildred Siemens was a true pioneer woman. She moved to Liberal, Kansas, on April 6, 1946 in a used U.S. Army surplus truck with her husband John and one month old twin sons, John and Joe, to begin farming. It was her husband’s dream to conquer the devastation of the dust bowl that had driven his father from Liberal fifteen years earlier. Mildred supported her husband’s dream and made a life on that farm for the next 60 years. The only other possession they had when they moved to Liberal was a new Oliver tractor. Life was difficult during those first few years without electricity, indoor plumbing or a telephone. After graduation from Walton High School in 1943 Mildred worked on the assembly line at Beech Aircraft in Wichita until the end of the war when she married John Siemens on June 6, 1945.Mildred was preceded in death by her husband John H. Siemens (2000), her brother Orson Flickner of Corona, CA, and her parents Joseph and Elizabeth Flickner of Walton, KS. She is survived by her twin sons, John Siemens (Judith Dufield) of San Antonio, TX, and Joe Siemens (Pat Saffell) of Kent, WA, and sister, Joan Smith of Liberal, KS. She is also survived by five grandchildren, Elizabeth Hawley of Wichita, KS, Matthew Siemens (Mindy) of San Antonio, TX, Jen Dwyer (Derek) of McGuire AFB, NJ, Karen Matott (Steve) of Spokane, WA, Leslie Beu (Jason) of Littleton, CO, and 11 great grandchildren: Austin, Garrett, Lynnia, Isabel, Bradley Marie, Trevon, Colten, Ethan, Kyler, and Jaxon.A memorial service will be held 10:00 AM Saturday, August 31, 2013 at the Liberal Friends Church and she will be interred in Restlawn Memorial Gardens North of Liberal, KS. Brenneman Funeral Home is in charge of arrangements. Memorial donations may be made to Odyssey Hospice of San Antonio, 4440 S. Piedras Dr. Suite 125, San Antonio, TX 78228 (www.ovhf.org) or the American Cancer Society (www.cancer.org/donate) in memory of Mildred.

Mildred Siemens was a true pioneer woman. She moved to Liberal, Kansas, on April 6, 1946 in a used U.S. Army surplus truck with her husband John and one month old twin sons, John and Joe, to begin farming. It was her husband&#8217;s dream to... View Obituary & Service Information

The family of Mildred Marjorie Siemens created this Life Tributes page to make it easy to share your memories.

Mildred Siemens was a true pioneer woman. She moved to Liberal,...

Send flowers to the Siemens family.