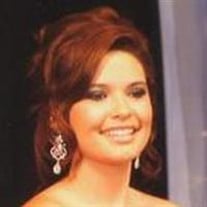 Montana Marie Beesley, 15, died Saturday, October 4, 2014 at Via Christi St. Francis Hospital, Wichita. She was born May 10, 1999 at Liberal, KS, the daughter of Donald W. and Renee (Mills) Beesley. She was a sophomore at Hugoton High School. She was a member of the First Christian Church of Hugoton. Montana was very active on the Praise Team where she sang and played guitar. She was also Group Leader for the Gopher Buddies Music Program at the church. She was very active in Volleyball, Softball, and was also a Wrestling Cheerleader. She was class president of her Freshman Class, and was involved in the Student Council. She was also active in the High School Marching Band and was to be in the High School Musical this year. She was very active in the FFA and was selected to sing at the upcoming FFA National Convention Talent Show, in Louisville, KY. She was a member of the 4H Cloverleaf Cowboys where she held many offices and was currently serving as treasurer. She held several Grand Champion and Reserve Grand Champion ribbons at the State Fair, and placed 3rd in the senior division. She rode English and Western on her horse Max, and her late horse Hidalgo. She showed steers, goats and won the Round Robin Senior Showman this year at the Stevens Co. Fair. She was known throughout the community for her singing talent, and had performed the National Anthem at many sports activities, including some SCCC Saints games. She received many titles in the Diamond Miss Pagents. She also was first runner-up at the Sorghum Queen Pagent at the Stevens County Fair. At the 2013 Kansas State Fair, she performed as the opening act for the band Kansas. She also sang for Senator Pat Roberts at Kansas Day. Montana was known as a “Hugger” and always had a smile on her face. She would say “I Love You” to everybody. Montana loved telling everyone about loving the Lord!Survivors: Parents: Don and Renee Beesley Hugoton, KS; 2-Sisters: Sydney Beesley and Faith Beesley of the home; Paternal Grandparents: Walter and Estella Beesley Hugoton, KS Maternal Grandparents: Doug and Rita Mills Hugoton, KS 3 Uncles: Walt Beesley and wife Jennifer Hugoton, KS Frank Beesley and wife Sheila Conway Springs, KS Matt Mills and wife Kyla Hugoton, KS 2 Aunts: Annette McClendon and husband Jeff Pampa, TX Stephanie Walkup and husband Rick Wichita, KS Cousins: Britta, Jenna, and Ella Beesley Hugoton, KS Makenna, Gavin, and Aiden Beesley Conway Springs, KS Collin, Brycen, and Alec McClendon Pampa, TX Maverick, Amanda, and Cody Mills Hugoton, KS Hannah and Rebecca Walkup Wichita, KSFuneral Service will be 2:00 pm Wednesday, October 8, 2014 at the First Christian Church of Hugoton, with Pastor Heath Kelly and Pastor Ben Coats presiding. Burial will take place in Hugoton Cemetery.Visitation will be 9am – 12 pm Tuesday, October 7, 2014 at Brenneman Funeral Home, Liberal and then from 3pm – 8pm Tuesday, October 7, 2014 at First Christian Church of Hugoton, with family present from 6 – 8 pm at the church.Memorials Contributions may be made to First Christian Church in care of Brenneman Funeral Home-1212 W. 2nd-Liberal, KS 67901

Montana Marie Beesley, 15, died Saturday, October 4, 2014 at Via Christi St. Francis Hospital, Wichita. She was born May 10, 1999 at Liberal, KS, the daughter of Donald W. and Renee (Mills) Beesley. She was a sophomore at Hugoton High School.... View Obituary & Service Information

The family of Montana Marie Beesley created this Life Tributes page to make it easy to share your memories.

Send flowers to the Beesley family.