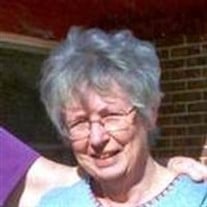 Myrna Jean Shaffer-White , 73 passed away on Saturday, Oct. 19, 2013 at the Sumner County Care Center in Wellington, KS following a courageous battle for years with PPA (dementia). She had been a resident at Wheatridge Park Care Center in Liberal since Sept. 2012, then Sumner County Care Center since Aug. 9, 2013.Myrna was born on November 17, 1939 in Pratt, KS to William J. & Imogene F. (Shaffer) White. In 1945 she and her parents moved to Liberal. Her parents preceded her in death.Myrna is survived by her son Michael Rodgers and wife Jessica and grandson Braxton all of Turpin, OK; and sister Marjorie and nephew Evan; as well as many relatives and dear friends in Kansas and California and elsewhere; and by close friend Reita Isaac, special care giver Linda Watson, and special neighbor Sharon Kessler.Myrna graduated from Liberal High School in 1957. In 1969 Myrna moved to Wichita, KS and attended Wichita State University. In 1979 she moved to California and in 1987 she earned her Bachelors degree from USCB, Santa Barbara, CA and in 1989 she earned her Masters degree from PGI in Carpinteria, CA.Myrna worked on the Space Shuttle at Vandenberg Air Force Base and was a counselor at the Santa Barbara’s Vet Center. When she retired in 2006 she was the Ad builder at the Santa Barbara Newspress Newspaper and moved back to Pratt, KS and then to Liberal in Oct. 2008. While in California enjoyed folk dancing as well as playing short stints as drummer in a local Irish band. All of her life Myrna was an accomplished artist dabbling in a variety of mediums.Myrna loved all animals and especially her dog Spunky and has great affection for children. She was also an avid admirer of nature, beautiful sunsets and cloud formations. She once light-heartedly remarked that she had moved to California to escape Kansas tornadoes, but within a few months after moving there, she witnessed – much to her dislike – a small and rare twister one day leaving work in Lompoc… she later remarked that is must have followed her from Kansas to California.Myrna’s family would like to thank all the many special people who provided care for Myrna as she battled PPA, especially those in her last days at Sumner County Care Center.Funeral service will be held at 11:00 am Wednesday, Oct 23, 2013 at Brenneman Funeral Home Chapel with Pastor Jack Jacob presiding. Burial will be at 4:00 pm Wednesday at the Pratt Cemetery in Pratt, KS.Visitation time will be 9am to 8pm Tuesday at Brenneman Funeral Home with the family present to greet friends from 6 – 7pm Tuesday.In lieu of flowers and plants, memorials contributions may be made to the Liberal Animal Shelter and sent to Brenneman Funeral Home 1212 W. 2nd Liberal, KS 67901

Myrna Jean Shaffer-White , 73 passed away on Saturday, Oct. 19, 2013 at the Sumner County Care Center in Wellington, KS following a courageous battle for years with PPA (dementia). She had been a resident at Wheatridge Park Care Center in Liberal... View Obituary & Service Information

The family of Myrna Jean Shaffer-White created this Life Tributes page to make it easy to share your memories.

Send flowers to the Shaffer-White family.