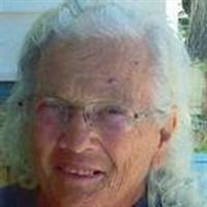 Permelia “Toad” Rogers, 81, of Liberal, died Sunday, December 8, 2013, at Satanta Long Term Care, in Satanta, KS.She was born May 16, 1932, at Webville, KY, to James Millard and Lucy Belle (Penix) Adams.She attended school in Louisa, KY, finishing the 8th grade. She and her husband, Eldon, lived briefly in Oregon and Utah, before moving to Liberal in 1949.She was a waitress for several different restaurants over many years. She also worked for Motel Sleepers as a dorm manager for 17 years. She was a loving mother and grandmother, who made many quilts for her family, and did handwork of all kinds, including ceramics. She also enjoyed playing checkers. She was a devoted Elvis Presley fan, and involved with Ladies Association Bowling. She taught her children that you treat others like you want to be treated.She was a member of South Church of God and a lifetime member of the VFW Auxiliary.She married Clarence Eldon Rogers, on July 9, 1948, at Clayton, NM. He died on Feb. 6, 2006.Survivors include:2 sons – Clarence Eugene Rogers and wife Cheryl, of Shattuck, OK, and Gary Wayne Rogers and wife Leshia, of Liberal2 daughters – Dianna Rogers, of Liberal, and Deanna Aistrup and husband Robert “Bob”, of Dumas, TX 3 grandchildren – Brittany Erin Rogers, of Norman, OK, Billie Dee Aistrup, of Keyes, OK, and Jamie JoAnn Rogers, of Monahans, TX4 great-grandchildren – Lacie Rogers, James Alfrey, Jon Michael Aistrup, Michael Wayne McCann1 sister – Helen Chaffin, of Blaine, KY. She was preceded in death by her parents; her husband; 2 sons – Billy, who died at birth, and Larry Dean, who died in 2002; 4 brothers - Chester Adams, Bernard Adams, Paul Adams, and Fred Adams; 3 sisters – Madge Simpson, Bernice Jennings, and Hazel Olson. Funeral Services will be held at 2:00 p.m. Thursday, December 12, at South Church of God, in Liberal, with Pastor Rex Petty, officiating. Burial will be in Liberal Cemetery.Visitation will be from 5 – 8 p.m., Tuesday and 9 a.m. – 8 p.m., Wednesday with the family present to receive friends from 6 – 7 p.m. at Brenneman Funeral Home. .Memorial Contributions may be made to South Church of God or Liberal Senior Citizens Center, in care of Brenneman Funeral Home, 1212 W. 2nd St., Liberal, KS 67901.

The family of Permelia "Toad" Rogers created this Life Tributes page to make it easy to share your memories.

Send flowers to the Rogers family.