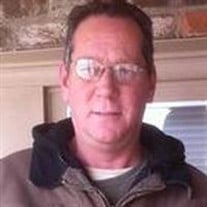 Reese Cameron Rutledge, 56, son of Verne and Ruby (Snavely) Rutledge, was born June 4, 1958, and passed away March 20, 2015 at Southwest Medical Center in the presence of his family.He was a typical farmer’s son who learned early on the principles of farming and dealing with cattle, and also the joy of horseback riding, hunting and fishing. He graduated from Sublette High School in 1976.A resident of Hays, KS for many years, he moved to Liberal in 2014 and was living at Good Samaritan Center at the time of his death. In 1985, he married Becky Reese. They later divorced, after which he married Shelly Goodwin, and they also divorced. Family was very important to him and he joyfully welcomed children, grandchildren, nieces, nephews and cousins into his life. He is survived by one son, Kyle Rugledge and wife Michelle, of Satanta, KS; and one daughter, Laci Rutledge, of Newton, KS; his mother, Ruby Rutledge, of Liberal, KS; sister, Vanessa Greeson and husband Todd, of Neosho, MO and 4 grandsons Joe and Adam Rutledge, Braxton and Jaxson Wakefield. He was preceded in death by a daughter, Sonni Marie Rutledge; and father, Verne Rutledge. Graveside service will be held at 2:00 pm Tuesday March 24, 2015 at the Haskell County Cemetery located north of Sublette with Pastor David Ervin presiding. Visitation time will be 1 to 8pm Monday at Brenneman Funeral Home in Liberal, KS.Memorial contributions may be sent to Good Samaritan Center Liberal Campus in care of Brenneman Funeral Home 1212 W. 2nd Liberal, KS 67901.

Reese Cameron Rutledge, 56, son of Verne and Ruby (Snavely) Rutledge, was born June 4, 1958, and passed away March 20, 2015 at Southwest Medical Center in the presence of his family.He was a typical farmer&#8217;s son who learned early on the... View Obituary & Service Information

The family of Reese Rutledge created this Life Tributes page to make it easy to share your memories.

Send flowers to the Rutledge family.