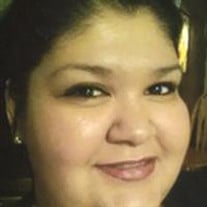 Rosa Elia Martinez passed away on Thursday, June 2, 2016 at Wesley Medical Center in Wichita, KS at the age of 37.Rosa was born July 17, 1978 in Phoenix, AZ to Jose Soto and Maria Negrete-Soto.She graduated high school in Santa Teresa, NM and continued her schooling at the International School of Business majoring in administration.On May 3, 2003 she was united in marriage to the love of her life, Javier Martinez, in Liberal, KS.Rosa and Javier had three beautiful children together, who were the light of her life.Rosa worked for eighteen years as a receptionist for National Beef Packing Company in Liberal, KS. She was a member of St. Anthony of Padua Catholic Church.Her family said, "The woman could cook!"Rosa was a dedicated wife and mother and a beloved sister and daughter. Her family meant the most to her.Survivors include:Husband- Javier Martinez of Liberal, KSFather-Jose Soto of Sunland park, NMSons-Javier Joel and Cristian Ivan of the homeDaughter-Kayla Aylin of the homeBrother-Jose F. Soto of Guymon, OKSisters-Maria Calvillo of Liberal, KS Blanca Soto of Sunland park NM Norma Soto of Amarillo, TX Sandra Soto of Amarillo, TX Lupe Carrola of Montrose, CO Angeleta Morales of Juarez, MexicoRosa was preceded in death by her Mother.Funeral Mass will be 10 am Friday, June 10, 2016 at St. Anthony of Padua Catholic Church, Liberal.Visitation will be from 9 to 5 pm Thursday at Brenneman Funeral Home. Rosary will be 7 pm at the church.Memorial contributions may be given to the Rosa Martinez memorial fund in care of Brenneman Funeral Home 1212 W. 2nd St. Liberal, KS 67901Condolences may be sent to the family at www.brennemanfuneralhome.com

The family of Rosa Elia Rosita Martinez created this Life Tributes page to make it easy to share your memories.