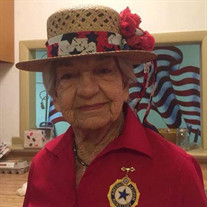 Sarah Lancaster Odom, age 91, died Friday, December 20, 2019, at Wheatridge Care Park in Liberal, Kansas. She was born January 27, 1928 in Eutaw, Alabama; the daughter of Chap Lancaster and Elizabeth Leavell. She was the eighth of nine children. Sarah Graduated from Green County High School in Eutaw, Alabama. She also graduated from Business College in Birmingham, Alabama working as a secretary and at the bank. Sarah met James Odom while she attended business college. For their first date they went to a midnight movie on Halloween and back then the theater had an organ they played during the movie, and Sarah fell asleep. James and Sarah were married on May 24, 1946 in Caledonia, Mississippi. They were married for 72 years. James and Sarah lived in Liberal in the same home for over 30 years. They had three children. She was a member of the American Legion Auxiliary, the First United Methodist Church, Southwest Medical Center Auxiliary and the Needles and Friends Quilt Guild. She also worked as a volunteer for many years at the Et Cetera Shop (Red Barn) in Liberal. Sarah had many hobbies that she enjoyed quilting, working tirelessly on the Quilts of Valor, decorating for all holidays, but especially Christmas, and collecting Precious Moments figurines. Survivors include: Husband: James Odom of Liberal, Kansas 2 Sons: Larry Odom and wife Anne of Tuscaloosa, Alabama Phillip Odom and wife Sally of Yukon, Oklahoma Daughter: Sharon Otte of Lincoln, Nebraska 8 Grandchildren 17 Great Grandchildren Sarah was also preceded in death by Her Parents; her brothers Cecil Lancaster, Tobe Lancaster, J.C. Lancaster, and Henry Lancaster; her sisters Jewel Davis, Earline Sielski, Doris Weaver, and Lois Chapman; and grandson, Jeremy James Odom. Memorial Service will be held at the Brenneman Funeral Home Chapel on Monday, December 23,2019 at 2:00PM with Pastor Keith Anglemyer presiding. Memorial contributions in lieu of flowers, may be sent to the Liberal Needles and Friends Quilt Guild or the American Legion Auxiliary in care of the Brenneman Funeral Home 1212 W. 2nd Liberal, KS 67901. Condolences may be sent to the family at www.brennemanfuneralhome.com

Sarah Lancaster Odom, age 91, died Friday, December 20, 2019, at Wheatridge Care Park in Liberal, Kansas. She was born January 27, 1928 in Eutaw, Alabama; the daughter of Chap Lancaster and Elizabeth Leavell. She was the eighth of nine children.... View Obituary & Service Information

The family of Sarah L Odom created this Life Tributes page to make it easy to share your memories.

Customized sympathy cards. Mailed for you.