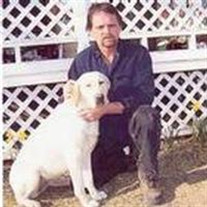 Steven Roy Ward 45, died Friday, July 12, 2013 at Via Cristi St. Francis Medical Center in Wichita, KS. He was born November 6, 1967 in Kansas City, Kansas. He attended Liberal Schools and then graduated High School in 1986 in Hillman, Michigan.He had been a resident of Liberal for many years off and on since he was a small child and was a current Liberal resident since 1986. He has also been a resident of Guymon, OK, Dodge City, KS, Hillman Michigan, Delta, Utah and Kansas City, KS.He worked for many years as a bricklayer and tree trimmer before becoming disabled Multiple Sclerosis in 2009.He was an avid gardener and loved fishing, woodworking and cooking. He also loved to spend time with his family, friends and his dog Natalie.He is survived by his parents Darrell and Shirley (Lamon) Salley of Turpin, OK. He is also survived by 1 brother, Doug Ward of Selma, North Carolina, 2 step-brothers Paul Salley of Liberal and Wade Salley of Topeka, KS. 1 step daughter, Jessica Crain, of Missouri, 1 Son, Christopher Ward of Missouri, 1 step-grandson, Kenny Crain of Missouri and several nieces and nephews.He was preceded in death by his father, John P. Ward in 2006 and his younger brother, Brian Ward in 2009. Also grandparents Roy Harvey Lamon and Leona (Hague) Lamon who were both extremely important in his life. Memorial service will be held on Friday at 11:00 am at the South Church of God, 635 S. Washington in Liberal.There will be no visitation as cremation has taken place.Memorial contributions may be sent to the National Multiple Sclerosis Society in care of Brenneman Funeral Home, 1212 W. 2nd Liberal, KS 67901.

The family of Steven Roy Ward created this Life Tributes page to make it easy to share your memories.

Send flowers to the Ward family.