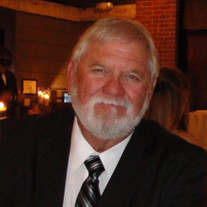 Thomas Ray Bradford passed away Wednesday, September 19, 2018 in hospice care at his son’s home in Liberal, KS. He was born February 26, 1946 in Childress, Texas the son of Wade Thomas Bradford and LaFern (Kennemer) Bradford. He graduated from Childress High School in 1964. He attended Texas Women’s University and obtained a master’s degree in Industrial Arts. He was employed as an Industrial Arts Teacher at Hillcrest High School in Dallas, Texas. He had also worked as a Drilling Fluid Engineer for N.L. Baroid. He was an Eagle Scout and a member of the Bone Head Boys in Childress, Texas. On October 5, 1968 He married Linda Gene Holtzman in Denton, Texas. They would have celebrated their 50th anniversary this year. He is also survived by: Two Sons, Jerome Maurice Bradford and his wife Charissa of Liberal and Michael David Bradford and his wife Kyla of Amarillo, Texas One Brother, David Baxter (Cheryl) Bradford of Tulsa Oklahoma. Two Sisters, Donna Faye (Robert) Russell of Fredericksburg, Texas and Jenny Lue (Danny) Lancaster of Canyon, Texas Seven Grandchildren, Maurice Bradford, Breanna Boots, Colby Bradford, Isaac Bradford, Mackenzie Bradford, Hope Bradford, Anakin Lamberson-Bradford He is preceded in death by his parents, Brother Wade DeWayne Bradford and Sister Sandra Sue Bradford A memorial service will be held at 10:00 AM, Monday, September 24, at the Brenneman Funeral Home in Liberal with Pastor Rex Petty presiding. Committal of the Cremated Remains will be at a later date in Childress, Texas. Condolences may be sent to the family at www.brennemanfuneralhome.com

Thomas Ray Bradford passed away Wednesday, September 19, 2018 in hospice care at his son&#8217;s home in Liberal, KS. He was born February 26, 1946 in Childress, Texas the son of Wade Thomas Bradford and LaFern (Kennemer) Bradford. He graduated... View Obituary & Service Information

The family of Thomas Ray Bradford created this Life Tributes page to make it easy to share your memories.

Send flowers to the Bradford family.