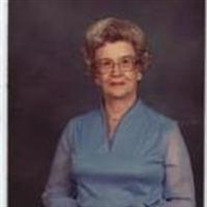 Una Stout was born Dec. 17, 1914 and died Dec. 19, 2010, two days after her 96th birthday, at Morton County Care Center, Elkhart, KS. She was born in Hooker, Ok to Gilbert Stanton and Sallie Ann (Mitchell) Wiggains. She graduated from Hooker High School and attended college at Panhandle State. Una and her husband, the love of her life, Malcolm Earnest lived in El Paso, Tx, Duke, OK, Dallas, TX then finally Oklahoma City where they moved in 1955. She worked for Aetna Insurance for over 25 years, spending the last several years traveling and organizing group coverage. After Malcolm passed away in 1967, Una became more involved with her church, Linwood Methodist, serving as Sunday School teacher, United Methodist Women, and volunteering at the church in many other capacities. As a servant of the Lord, she took her purpose on earth seriously and spent her life helping others. She said everything she had was “on loan from God.” She was very active in various community organizations including the Oklahoma City Literacy Council. Una was petite, but she was mighty! Una had a special gift for fashion, cooking and raising Dobermans, but more importantly she cared passionately for her family, friends, and especially Jesus.Survivors include Granddaughter Cara Gilmore and husband John of Edmond, OKGreat grandchildren Austin Stout, Christian Gilmore and John Gilmore, Jr Edmond, OKDaughter-in-law Jeannie Cook Oklahoma City, OKShe was preceded in death by two sons, Larry Malcolm and Terry Ray Stout.Cremation has taken place. Memorial graveside will be 1:00 p.m., Monday, Dec. 27, 2010 in the City of Altus Cemetery with Pastor Kevin Fouts officiating. Memorials may be made to the Oklahoma City Literacy Council in care of Kitch-Brenneman Funeral Home, 1212 W. 2nd St., Liberal, KS 67901. Condolences may be left at www.brennemanfuneralhome.com for Una’s family.

The family of Una Stout created this Life Tributes page to make it easy to share your memories.

Send flowers to the Stout family.