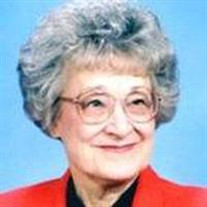 Myrtle Alyene Pettijohn, 92, died January 3, 2012 at Southwest Medical Center in Liberal, KS.She was born November 10, 1919 to George Roy and Mary Anna (Hensley) Headrick at the farm home of Ed and Mary Fisher east of Adams in Texas County, Oklahoma. She graduated in 1937 from Adams High School as Valedictorian of her class. Myrtle married Rex A. Pettijohn on August 2, 1952 at the United Methodist Church in Raton, New Mexico.For many years she worked at the Warren Hotel and Coffee Shop as a waitress, cashier, hostess, desk clerk, bookkeeper and assistant manager. On June 16, 1955, she went to work for Panhandle Eastern Pipeline Company in Liberal. During this employment, she was a file clerk for the transmission department, secretary for Division I Compressor office and Division I clerk. She retired December 31, 1984 after 29 ½ years of service.Myrtle was an excellent seamstress having won a national sewing contest in 1949 and was awarded a trip to New York City. Her talent was displayed through the years with the making of many dresses for her nieces for special occasions. The hobby she delighted in the most was taking pictures of her many nieces and nephews. There was always a birthday party, graduation, wedding, Easter and Christmas, or any family gathering. They are in albums with the names and dates carefully recorded.She belonged to the First United Methodist Church, UMW Circle 6, Southwest Medical Center Auxiliary, Panhandle Eastern Retirees, and the Oz-some Red Hat Grannies. Myrtle loved to dance and for many years regularly attended the Friday Night dances at the Liberal Senior Center.She is survived by long-time Special Friend J. D. Stoddard, Liberal, KS, four Brothers Melbourne Headrick, Hooker, OK, Harlin Headrick and wife Marjorie, Guymon, OK, Ronald Headrick, Aztec, NM, Ivan Headrick and wife Marylin Liberal, KS, one Sister Mary Hintergardt, Guymon, OK, two Sisters- in-law Mable Headrick, Wichita, KS and Roberta Cantwell, Turpin, OK and many nieces and nephews and their families.Preceded in death by parents, 3 Brothers Jacob Headrick, Warren Headrick, Donald Headrick, one Sister Georgia Williams.Funeral Service will be held 1:00 pm Saturday, Jan 7th at the First United Methodist Church with Pastor David Randall presiding, Burial will be held in Restlawn Cemetery, Liberal.Visitation time will be 1 to 5 pm Thursday and 9 am to 8 pm Friday at Brenneman Funeral Home.Memorial contributions can be made to the First United Methodist Church in care of Brenneman Funeral Home 1212 W. 2nd Liberal, KS 67901

The family of Myrtle A. Pettijohn created this Life Tributes page to make it easy to share your memories.

Send flowers to the Pettijohn family.