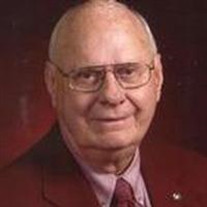 William C. “Bill” Scantlin, 88, died Friday, July 4, 2014 at Emeritus/Liberal Springs Assisted Living, Liberal. He was born April 16, 1926 at Pratt, KS, the son of William Joseph and Katherine Bessie (Doll) Scantlin. His family moved to Liberal in 1941 and he graduated from Liberal High School in 1944. He served his country in the United States Navy from May of 1944 to 1946 serving upon the USS Torrance for two years in the south Pacific, during World War II. While away in the Navy, a romance grew from the many letters sent from Leona.He married Leona Marie Smith on October 6, 1946 at Liberal, KS, She survives.Other survivors include his five Children: Mike Scantlin of Oakdale, MN; Randy Scantlin and wife Teresa of Overland Park, KS; Gayle Mustoe and husband Barry of Amarillo, TX; Jim Scantlin and wife Vickie of Liberal, KS/Claremore, OK and Cheri Pratt and husband Shan of Ozark, MO; one Sister: Margaret Frame of Pratt, KS.12 Grandchildren: David Scantlin; Sarahbeth Spasojevich and husband Steve; Craig Scantlin; Marcus Scantlin and wife Melinda; Jonathan Scantlin and wife Nicole; Benjamin Scantlin and wife Jessica; Nathan Mustoe and fiancé Nicole Griffin; Phillip Mustoe; Amy Burr and husband Devin; Chad Scantlin and wife Tawna; Dustin Pratt and Skylar Pratt.15 Great-Grandchildren: Jack Spasojevich, Andrew Spasojevich, Simone Spasojevich, Blake Scantlin, Luke Scantlin, Abigail Scantlin, AJ Scantlin, Amarie Scantlin, Brae Brewer, Cross Scantlin, Austin Burr, Callen Burr, Asher Scantlin, Sawyer Scantlin and Porter Scantlin.Bill and Leona raised their family in Liberal and were active in the business community.In the early 50’s, he was co-owner of the Frosty Mug Drive-In. He then worked as manager of Lloyd’s Furniture for 25 years. On April 16, 1972, Bill and Leona held the Grand Opening of Scantlin’s Furniture and Carpet. Their sons, Randy and Jim, worked with them as they grew the business. Bill semi-retired in 1989.He was a charter member of Pershing Avenue Christian Church, now known as Central Christian Church and was instrumental in purchasing the building at 5th and Lincoln. Bill was a church Elder and Chairman of the Board for over 30 years. While his sons were young, he was a Boy Scout Master and played a pivotal role in helping to acquire Spanish Peaks Scout Ranch. He was a long-time member of Liberal Kiwanis Club, serving at the state level as Lieutenant Governor and a former member of the Mutual Investment Club of Liberal. Bill was a long standing member of the Donut Shop coffee group where many of his closest friends met to have intellectual discussions about what was right and wrong in this world. He was preceded in death by four Sisters and one Brother: Florence Scantlin, Thomas Scantlin, Helen Scantlin and twins Pauline Smith and Maurine Crothers.Funeral Service will be held at 10:00 am Tuesday, July 8, 2014 at Central Christian Church located at 5th & Lincoln with Pastor Chuck Scroggs presiding. Burial will follow at Liberal Cemetery with military honors.Visitation will be 12:00 noon – 8 pm Monday with the family present to receive friends from 6:30 – 8 pm Monday at Brenneman Funeral Home.Memorial Contributions to Central Christian Church or SCCC/ATS Foundation for the Bill and Leona Scantlin Endowment Fund in care of Brenneman Funeral Home-1212 W. 2nd-Liberal, KS 67901

The family of William C. Scantlin created this Life Tributes page to make it easy to share your memories.

Send flowers to the Scantlin family.